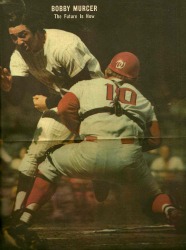 These baseball coaching tools are very high on my coaching approach. Five years ago the American Baseball Coaches Association (ABCA) established the “Ethics in Coaching Award.”

Each year the ABCA names a winner from all of college and high school baseball coaches.

It is really awesome that a baseball organization as big and influential as the ABCA has begun to recognize the need for acknowledging the code of ethics needed in baseball. 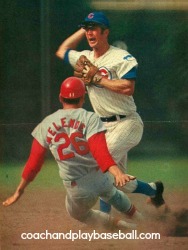 I spent almost 20 years in professional baseball in various positions as a player, field manager and player development. Rarely if ever do I remember many incidents on the ball field that would cross the line in ethical conduct.

There is little desire, time or need to worry about getting into the opponents business. Pro players rarely get into bench jockeying and bantering back and forth like is sometimes allowed in high school baseball age and above into college baseball leagues.

I think professional ballplayers and professional coaches respect each other even though each is trying hard to beat the other team. There is a mutual respect for all parties in the professional game mostly because of the difficulty of playing the game well and the desire to keep your job.

This baseball coaching tools mindset is often lacking in amateur baseball since players are pretty much on the team as soon as the season starts with no recourse to be fired on the job like the pros.

#1 Know When to Call Off the Dogs

Find a comfort zone where you can live with to ‘call off the dogs’ when your ballclub takes a commanding lead. When you get a big lead then stop stealing, bunting and hit-and-running.

It is ok to score as long as you are just swinging away. I saw a junior varsity game this year where the coach was stealing up 15 runs. I wanted to go over and say, “What in the world do you think you are trying to prove?”

Would you continue with a full court press in basketball when you have the game in the bag later in the game? Would a football team continue passing the ball with a commanding lead toward the end of the game?

I see way too often teams purposely using the steal, hit and run, bunt and squeeze bunt in order to reach this 10 run rule limit. I think that is as low as you can go but more and more it seems to becoming the norm more than the exception.

Of course I do not believe in mercy rules the 10-run rule anyway. These are baseball coaching tools to help build your style.

#2 Cheer for Your Own

A favorite of my baseball coaching tools is when I tell my players to stay with our guys. Cheer for us. Stay out of the other team’s dugout. Don’t get drawn into bench jockeying with the other teams dugout.

Often baseball coaches will look the other way or have selected hearing letting their kids run their mouths throwing little digs at the opponents. 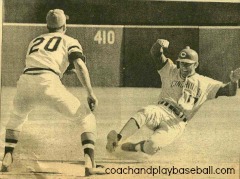 I got tossed from a game once managing the New Britain Red Sox (AA) after Todd Pratt went in hard to break up a double play against the Albany Yankees. I had just chewed my players pretty good early that day for not sliding hard and some not even sliding at second base trying to break up the double play.

Todd went a little out of the baseline (well, more than a little) and the umpire correctly called him out. But, I needed to make a point to my players that it is expected of them to go hard, play hard as long as you are not trying to be maliciously attempting to injure another player.

#4 Coach Your Own Players

#5 Treat Umpires with the Highest Respect

Even when we don’t like their calls, their demeanor, their judgment or anything. Always treat the umpires with the utmost respect (begins with learning their names and not calling them ‘BLUE’).

#6 Be Able to Win and Lose Correctly

Be Humble in Victory and Sad but determined in defeat:

Winning is a good feeling but do not gloat and make a big deal about it in front of your opponents. Don’t rub it in.

Likewise, be a good sport in losing even though you don’t feel like it. Tip your hat to those who beat you on that day and be determined the next time.

Never allow your players to throw equipment without serious consequences. It looks bad and is dangerous.

Nothing good can come of it. Do not allow lollygagging. Nip it in the bud early. There is one way to play and that is hard.

It takes no talent to run hard all the way through first base so everyone can do it. One of my given baseball coaching tools.

Pick up the dugout: Leave the visiting and home dugout cleaner than you found it (hopefully it was pretty clean). Pick up after yourselves.

Visitors Put the trash in the garbage can before you leave the ball field. Home teams have to break down the equipment, bases, flags, scoreboards and repair the ball field before leaving.

Never allow parents to hang around the dugout area. Make sure the parents know that coaching from the bleachers is a no-no. Keep the parents off the umpires. Explain all this in the pre-season parent/coaches meeting.

Stealing the other teams baseball signs is well within the rules of baseball. As long as you use your human abilities and not use electronic devices it is acceptable to try to pick off signs from your opponents.

Pitchers and catchers tipping pitches or infielders moving too early giving away pitches are all part of the game and fine as baseball coaching tools.

...until high school varsity: Trying to win is a vital part of baseball and sports.

Winning at all costs rather than developing players is dead wrong. When you tell your 9 year olds to take pitches and try to get walks you are a win-at-all-costs coach and virtually ruining hitters chances of becoming hitters in higher levels of baseball.

If you are only pitching one or two pitchers you are a win-at-all-costs baseball coach and not following my baseball coaching tools.

Back to Coaching Tips from Baseball Coaching Tools