Sandlot Baseball: There was a day when sandlot ball and pick-up games were the way players developed their skills.

We have moved a long way from free-play style games and now rarely does a ballplayer ever play outside the umbrella of organized leagues and tournaments.

Let us look at why baseball players have moved away from sandlot ballgames and also look at the possibilities of bringing back pick-up games.

How to quickly and easily add sandlot style scrimmages to your baseball practices. 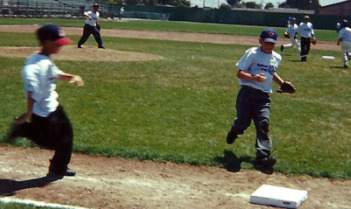 The biggest reason might be parents. So many parents look at youth baseball as a vehicle to a college scholarship or a steppingstone to a pro contract. We have shown the chances of playing baseball past high school and it is not really in the players favor.

Instead of parents looking to baseball as a personal growth experience they have visions of stardom in their heads.

Another reason might be fear. Parents often are afraid to let young kids out of sight much less let them meet down at the local playground to play ball unsupervised.

Forty or fifty years ago parents did not worry about their kids going to the sandlot and playing ball all day. Now, you’re afraid to let them go around the corner.

Why Bring Sandlot Games Back?
It's Kinda Fun

Young baseball players need practice and repetitions. There is just no way to get around it.

Take a look at a young player in the Dominican Republic that spends a day at the sandlot. He might have 15 or 20 at bats, numerous chances fielding grounders, fly balls, throwing plays, and several baserunning turns.

Our baseball America players here in the United States play around three games a week. If they are lucky they might get 3 or 4 at bats per game.

Over a month long period that would give them up to 48 at bats. Probably less because so many of our coaches encourage players to draw a walk.

The Dominican kid playing three times a week might end up with over 100 at bats per month. He also played without a parent criticizing him on the way home and a coach hollering at his every little boo-boo all day.

Why do you think so many of the world’s best players come from a small little poor Latin island in the Carribean? Could it be that the unorganized baseball model is working better than our organized model?

How Many Times Do We Catch, Throw and Swing It?
Count the Contacts

Next time you are at the ballpark count how many times your child or each child throws the baseball, catches the baseball and swings the bat.

From the moment the players arrive until they pack up and leave keeps tabs on each baseball contact.

Now if the player is the pitcher or catcher then the number is going to be rather high. All the other players will be rather low.

Many players who only play a couple innings will have minimal contacts with the baseball. They would have been far better off staying at home and playing a half hour of catch with dad and playing a wiffle ball game with their friends.

Sandlot baseball gives everyone equal playing time and a chance to play multiple positions. The sandlot games are fast moving so hitters can bat more often.

How to Encourage Sandlot Games
Building Sandlot into Baseball Practice

Do you need some help formatting sandlot style games into your youth league team's practices? You don't think you have enough players for two teams to scrimmage?

This is all laid out here in my other products. A step-by-step template on how to add sandlot scrimmages easily to any number of players on the team.

Find out quickly how much fun practice becomes adding my sandlot scrimmages to your practices.