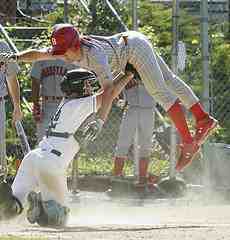 Playing catcher position is a very challenging baseball position. Catching is demanding physically and mentally. I know because I was a catcher

In the same token catching is so intertwined into the game that it is so rewarding for the eager baseball player.

If you don’t mind the work it takes to squat up and down hundreds of times a game and you enjoy the leadership and cerebral intensity that playing the catcher position demands then this is the position for you.

How to Find a Good Catcher
from 'Slim Pickens' 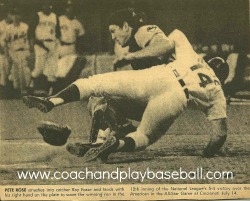 A catcher has to willingly get into the catching stance over and over. Although there is little if any proof that catching is physically harmful to knees it does cause immediate strenuous strain and discomfort on the muscles of the legs.

You have to have the toughness to know you are going to get hit with foul tips and pitches in the dirt in areas that are not always protected. You are going to have to weather some pain.

This eliminates many more players right here, too. In addition, we have to find a player that can catch the ball, block the ball and throw the ball. Okay, whom do we have left? It might be ‘slim pickins’.

The main job of playing catcher is to try to prevent runners from reaching scoring position. 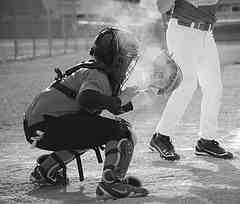 Too many passed balls make it too easy for the opponents to move into scoring position.

If the pitchers do not have above average velocity and stuff it is usually easier to catch the ball consistently. When the pitchers start throwing the ball with above average speed and breaking off sharp late breaking biting pitches then the difficulty level increases.

When the catchers glove hand is relaxed the chances of ‘boxing up’ or getting ‘handcuffed’ is greatly reduced.

Also, making sure the arms are outreached far enough that the elbows can maneuver freely without getting tangled up with the knees.

NOTE: Be cautious trying to overly ‘frame’ the pitches.

Often baseball coaches offering catcher instruction in an attempt to deceive the umpire will teach catchers to turn the catchers glove to such a degree that there is very little area for the ball to get into the glove.

The professional baseball catching technique replaces the drastic glove turning or ‘framing’ with just a gentle, discreet move of the glove toward the middle of the body.

This allows for the entire pocket of the glove to allow the ball to get into the glove preventing sloppy passed balls.

Blocking the Ball in the Dirt = Backstop

Playing catcher requires that the catcher be able to consistently block pitches that bounce in the dirt in front of home plate.

Blocking low pitches for a catcher have to become like a routine play just like an infielder catching a groundball.

The reason for blocking the ball in the dirt is two fold. Obviously we know that our job is preventing runners from advancing to scoring position.

Having confidence that the players playing catcher can handle the ball in the dirt is paramount. Otherwise the pitcher will lack the confidence to be able to throw the ball low in the zone and might inadvertently ‘hang’ the off speed curveball and end up backing up third base. 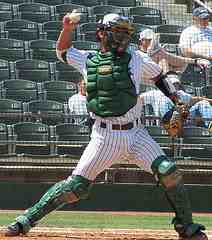 Playing catcher requires very skillful throwing assets Getting rid of the ball quickly and making the long throw to second base in an accurate fashion is a very difficult defensive play.

Add a hitter taking a swing at the pitch and the difficulty increases.

Catchers obviously cannot throw out every runner trying to steal. Working with the pitchers ability to deliver the ball fairly quickly to home plate the catcher must get the ball down to second base.

The catcher-pitcher combination has to make it kind of risky for the opponents to try to steal bases.

We cannot afford to let the baseball teams just run wild on us. We have to at least defend the running game to a modest degree of success to keep runners out of scoring position.

Learn About Baseball Using Your Head

The catcher’s position requires someone who can stay focused in the game.

There is this whole pitcher-hitter-catcher little game going on all the time.Plus, the catcher relays the 1st and 3rd situation baseball signs, calls out the base on bunt plays and reminds the pitchers to ‘get over there’ on the ball hit to the right side and on and on.

There is so much to do as a catcher there is absolutely no time to ‘play the grandstand’. You have to keep your head in the game. No time for checking out the bleachers and crowd.

There is only one thing worse than a catcher that is a lollygagger. That is a pitcher that cannot throw strikes.

A catcher that does not bounce around after the ball, hustles on and off the field and backs up firstbase on plays in the infield can ruin the game of baseball.

A deadbeat catcher is the worst. The whole game is just a labor. Find another catcher if the kids playing catcher do not have any life in them.

If you have a catcher that plays like they are getting ready for the ‘electric chair’ and is in misery then try someone else.

When putting together a baseball team of course you always look for pitchers to develop. In addition, it is wise to put as very high priority to find a couple of players that possess some of the qualities here so you don’t end up with a lollygagger behind the plate playing like they are on their way to the electric chair.