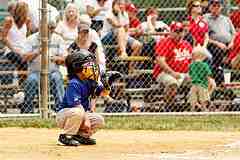 Catchers give many baseball signs for youth teams. Most baseball teams will have the catchers relay the baseball coaching signs for the defensive play from the bench to the pitcher and infielders.

The bunt defense signs and plays and the 1st and 3rd situation are the most common situations for catchers giving baseball signs for youth infielders.

Catchers also will be giving or receiving simple baseball signs involving pick-off plays with infielders. Picking off runners by a catcher is huge weapon for a youth baseball team.

In addition, catchers will be calling for baseball signs for pitchers to tell them what to do as far as defending the running game with various pick-offs signs, slide steps signs, inside moves, hold the ball, step backs, and pitch out signs. On top of this, the catchers must call the pitches using easy baseball signs to give to their pitcher to call the pitches.

In Addition to Easy Baseball Signs 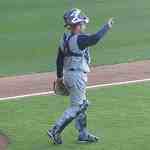 That is not even counting all the pre-pitch reminders that catchers must do like: reminding the pitcher to “get over there” when a lefty hitter comes up. Pitchers have the responsibilty to cover 1b any time the firstbaseman vacates the position to field the ball.

Telling the pitcher to “Check with the middle infielders to see “who is covering the bag” on a comebacker with a runner on firstbase and less than two outs.

Or, reminding the pitcher “come back to me” with the bases loaded and less than two outs.

Always reminding the infielders to “throw across the diamond to firstbase” on a 3-2 count and two outs (the runners are running on the pitch so there will be no easy force play option).

And of course reminding everyone on the field know how many outs.

You can see that the catcher is involved with giving baseball signs for youth teams along with their other responsibilities. Let us look a little closer in the catchers youth baseball signs when calling pitches.

The higher you get in baseball the more apt the opposing team will be trying to steal baseball signs. If an opposing hitter knows what pitch is coming they are more likely to square up on the ball and hit the ball really hard.

Great care and concern must be put into catchers, pitchers and infielders not ‘tipping’ off the catchers’ signs. Here is a how to give baseball signs for youth catchers short coaches checklist.

1. Catchers should point their knees to the second baseman and the shortstop slightly to the left of the pitchers mound. This closes off the firstbase coach from seeing the catchers’ signs. The catchers glove should cover the area under the knee to stop the third base coach from viewing the catching signs.

2. Keep your feet together and you back relaxed and straight up. Your baseball signs are given right next to your cup area making sure the fingers cannot be seen sticking below your rear end.

4. Now that all possible ‘openings’ are covered up we can now start giving baseball signs to the pitchers.

SIDE NOTE: For most youth pitchers you do not want to get too fancy since trying for the middle of the plate and low may be the best choice to get pitch over the plate.

6. Two fingers is usually the call for a curveball. There is not much choice in calling location since the ball should be curving to the outer part of the plate vs. a righty batter and hopefully end up low in the strike zone.

7. The slider is called with 3 fingers. You can use the first three fingers or the last three. The slider pitch is thrown on the outside part of the plate vs. a righty hitter and inside corner vs. lefty hitter so location is predetermined. A very high level professional pitcher may ‘back door’ the slider by starting the pitch inside vs. the righty hitter or well outside vs. the lefty hitter and see if they will give up on the pitch initially and the last moment the ball could nip the corner.

This is not recommended for the large majority of youth baseball pitchers because the command of pitches is not developed to this skill level and a pitcher will end up ‘hanging pitches’ right down the middle or missing way inside vs. a right-hand batter.

8. A subtle wiggle of all four fingers is used for a change-up pitch grip. Location is rarely needed with the changeup since we want the pitch low in the strike zone the change of speeds should make up for having to hit the corners. Down the middle and low is what you want the pitcher to focus on.

SIDE NOTE: In higher levels of baseball if the on deck is pretty close to the catcher I have heard of the on-deck batter picking up the change up sign by watching the catchers forearm.

When the tendons and the muscles in the forearm all wiggle and twitch when the fingers are moving during the change-up finger wiggle the on deck batter can let the batter know with verbal baseball signals. “Hey, wait back Billy” or something of that nature might be telling you that the on deck hitter can see the catchers signs.

Easy Baseball Signs for Youth With a Runner on Second Base

Baseball signs for youth pitchers and catchers should vary with a runner on second base. First, the pitcher and catcher do not want the runner at second base to ‘relay’ the pitches to the hitter.

Second, the runner at second base would be harder to throw out stealing thirdbase if they run on an off-speed pitch. Here is some simple ways for giving signs in baseball with a runner at second.

1. Never use the second sign. Everyone in baseball knows that most pitchers and catchers us the second sign so that is what the runner will look for first.

2. Use a first sign or a third sign in a series of 3 signs or more. Change the baseball signs up if the runner is on second base and sees 8 or more pitches. They might start catching on.

4. Make sure the middle infielders know when you change the signs. 5. Reverse the fastball and curveball signs. Use one finger for the curveball and two fingers for the fastball.

6. Catchers: remind your pitcher just before putting your fingers down that you will call a series of pitching signs. Just take your hand and index finger and roll it two or three times like telling the pitcher “I am rolling through the Rolex file here”.

This should prevent the pitcher from seeing the first sign and starting into the ‘stretch position’ and then stopping when they realize you were calling a series of pitching signals. Otherwise the umpire could call a ‘BALK’ on them for starting and stopping their pitching motion.

The catchers fingers may be impossible to see during some night games because the shadows make it too dark.

Some catchers will put a small strip of white tape around their fingers or paint whiteout on their fingernails. You should have an ‘outside set’ of baseball signs ready to use too.

You can touch parts of your body like a third base coach gives baseball batting signs and baseball signs to youth players.

This is one of the reasons I wanted to be a catcher. Catching is very, very busy and lots of work which was right up my ally.

It seemed a little boring to go play another position after playing catcher.