Here is a baseball sign system made so simple no one will ever pick up your signs. Easy for your players to pick up and nobody ever misses team signs.

Check out this sign system to set up in less than 5 minutes. Very easy to alter and change in case you think someone has picked up your team signs.

This is a full proof idiots guide, baseball for dummies type sign / signal system for any baseball team at any age level. Check these signs out at signs.

Baseball Sign: How to Set Up
Your Infield Defense

We need a baseball sign for several defensive situations that come up in just about every baseball game. Various baseball situations call for baseball plays when runners reach base.

Baseball coaches will have a baseball sign so everyone on the team will know what the defensive baseball play is for the current situation.

When someone is learning how to coach baseball it is important to go over with the team both physically and verbally what you as the coach want the team to try to execute. Before every game and during most baseball practices are both excellent times to review the baseball signs offensive and defensive game situations.

Part of baseball coaching is communicating what you want your players to try to do. Top baseball coaches regularly go over each defensive and offensive baseball sign.

How to Defense the 1st & 3rd Situation 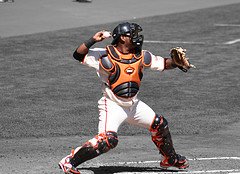 When I watch youth baseball coaches and teams I am amazed at how almost every youth baseball team just lets the runner on first base steal second base uncontested.

Youth baseball teams will regularly let the runner steal second without a throw or fake or any type of attempt. It is like you might as well just put the batter runner on second base.

Even worse, I have seen many baseball coaches get upset at the catcher if they throw to second base on the steal attempt with a runner on third base. You cannot just do nothing and let a runner reach scoring position without any attempt to defend the play.

At least try an arm fake or a throw back to the 2nd base and have the pitcher cut the throw off. You might sucker a guy in once in awhile.

I like to use these three baseball plays during the 1st and 3rd situation. I never have used the ‘do nothing’ play. I always try something.

As the baseball coach, I relay a sign from the dugout to the catcher. With all eyes on the catcher they will step out in front of the homeplate and let the infielders know what the play is for each situation.

The catcher puts two or three decoy baseball hand signs on with the right hand. The play is really given by what the catcher does with their catchers mitt.

1. Throwing to Second Base: If the catchers mitt is straight down on their side then the play is to ‘throw through’ to second base. I am telling the catcher to try to throw the runner out trying to steal second base.

2. Arm Fake and Throw to Thirdbase: The baseball sign is the catchers mitt will be at their belt or hip. This baseball catchers sign tells the infielders the play is to arm fake to second base and try to pull the runner off third base far enough to pick off the base runner.

3. Throw Back to the Pitcher: The baseball coaching signs are relayed to the catcher. The catcher signs the infielders by holding the catchers mitt on shoulder while giving some decoy signs with the throwing hand.

The baseball play is to have the catcher throw the ball toward second base but the pitcher is to cut the ball off and catch the ball. We are trying to lure off of thirdbase an aggressive runner and trap them in a rundown.Note: Middle infielders do not cover the second base bag on play two and three.

If the runner on first breaks for second then the pitcher must quickly throw the ball to second base. Don’t forget to ‘look’ the runner back on thirdbase before throwing to second.

Where Is the Pitch Out?

I have seen well over a hundred baseball games over the past year from the high school level on down to 8 and 9 year olds. I have yet to see a pitch out in any of these games.

Granted, Little League baseball does not allow lead offs so conventional base stealing does not apply.

All the USSSA travel teams and non Little League baseball organizations mostly do allow lead offs and conventional base stealing.

My question is why no baseball coaches call for pitch outs with a runner on first base?

Do you know what baseball signs the major league baseball coaches are giving when they are shown on TV touching their face and body parts from the dugout?

When a runner is on firstbase the coaches in the dugout are giving the catcher a baseball sign on which pick off play is called for. The coach is NOT calling pitches—They are calling pick offs, throw over’s, holds, slide steps and pitch outs.

Yes, professional baseball coaches rarely call pitches—but they do call pick off plays and pitch outs. Why? Because the successful baseball teams have to try to neutralize the opponents' running game to some degree of success.

A good baseball team is able to keep runners out of scoring position or at least make the opposition have to really make it difficult in reaching second base.

You cannot just let runners steal second willy-nilly without a defense to slow down the running game. Certainly if a baseball team can get around 30%-50% for throwing out runners at secondbase that is a marked improvement over a meager 10%.

That is why top baseball coaches know how to use pick-offs, step backs, holds, slide steps and pitch outs to keep teams from running wild on them.

Use the pitch out play during the first and third situation to throw out runners trying to steal second base. With less than two outs the runner on third is likely to score anyway. Often trading an out at second for a run scored is not a bad thing. Giving up a run for an out is good sometimes.

Remember: giving up a run here and there is not all bad. Giving up those crooked numbers several times during a ballgame is tough to overcome.

Some baseball coaches usea baseball play that calls for the shortstop or secondbaseman to release from the secondbase bag and go meet the throw from the catcher and try to get the ball back to the catcher before the runner scores from thirdbase.

This baseball strategy callsfor a high level of catching and throwing skill for the play to be executed successfully. Two players have to be able to make strong quick accurate throws and make the catch along with tagging the runner.

This type of baseball skill is difficult to execute for even high-level baseball players. But, I would rather see a baseball team and youth baseball coaches try this type of play rather than do nothing at all.

Use of a baseball sign can improve your team defense and help neutralize reaching scoring position.

Thanks so much for visiting my site. We appreciate your time and invite you to return later on and share the site with other fellow baseball folks. Yours in baseball.