As a superb youth baseball coach, teaching baseball throwing drills are a critical part of the job. Although difficult, teaching players how to throw like a pro will drastically improve their defensive skills.

Coaching baseball players well includes knowing the basics of throwing and works wonders for you as a mentor and teacher.

You do not have to be an expert guru to teach these throwing drills in your practice plans.

Just keep it simple and follow the professional teaching model.

Baseball is a fast game. The higher up you go the faster the game gets.

As youth players age the fields get bigger.

Having good fundamentals really becomes an asset. The players who have strong arms, can get rid of the ball quickly and hit the targets become very valuable players. These players will likely play the up-the-middle positions.

Professional coaches call it playing ‘closer to the ball’. In other words, the players who catch and throw the best are able to handle the ball the best. So, the best ball handlers will usually play catcher, pitcher and infield. 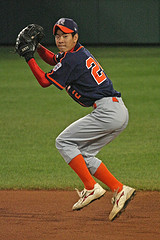 In all levels pitching is really important. Pitchers who can throw strikes are very vital.

Catchers too are really a key to effectively defend the opposition from reaching scoring position.

But shortstop is often one of the most difficult of positions to fill. Shortstop requires a number of skills and throwing drills in fundamentals that many youth players just do not ever develop.

Finding a player who can make a strong, accurate and quick throw all the way to first base is not that easy. In addition we have to go catch the ball before we even make the throw.

One the most satisfying moments in coaching youth baseball is watching your players execute a routine play. Especially awesome is when players have to make a long throw from the left side of the infield to first base or from the catcher to second base.

This is why you want to practice these plays over and over and over. It is a good idea to put all your infielders at shortstop and perform the bucket drill in all baseball practice plans.

Adding the 'Shuffle Drill' to
Your Baseball Practice Plans 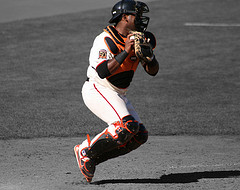 The shuffle drill footwork is what the professional baseball infield coaches teach their players. Almost every throw a defensive player makes incorporates a shuffle of the feet.

The key is to have your player be able to only shuffle each foot one time. If a fielder takes more than one shuffle the play will likely be very close at the base or maybe too late.

An infielder taking an extra shuffle is usually equal to two to four steps for a baserunner. A routine play performed with one shuffle can turn very close or ugly with multiple shuffles.

Look at the picture of Pablo Sandoval in the course of shuffling his feet His right foot will land a split second before the left stride foot lands in line with the target at second base. Note the legs are bent at the knees.

Baseball throwing drills with a shuffle and throw technique will allow ball players to execute in game situations when plays need to be made.

How To Teach the 'One Shuffle & Throw' Baseball Throwing Method

A right-handed baseball player will move their right foot toward the target a split second before the left strides to the target. The right foot ‘plants’ as the push off foot.

That is why it is called a shuffle. Some baseball coaches call this a ‘crow-hop’.

Teach your players to use this fundamental foot work warming-up, between innings, and during all practice plans.

The longer the throw The Bigger the Shuffle.

The longer distance a player must throw the more momentum they must generate to accurately reach their target base. So your coaching tips would include ‘The longer the throw-the bigger the shuffle’. The players have to increase the length of their shuffle step as the throw increases in distance.

Other baseball throwing drills coaching tips include: keeping your legs bent, spread out and low to the ground. The players’ throw will ‘carry’ longer when they keep their legs bent.

Back to Home Page