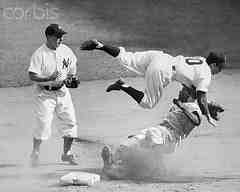 How to Play Second Base 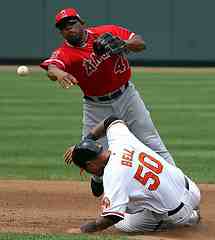 Second basemen have an extremely high level of responsibilities.

Beyond the fielding aspects the second baseman must know who, what, when and where to cover first base and second base, back up, and line up for cut-offs & relays.

Constant communication with the shortstop and the pitcher is ongoing. Middle infielders do not have the luxury of making mental errors and mistakes by not covering 2nd base at the appropriate time.

Baseball team defense calls for all the bases to be covered at all times. A mental lapse by a 2nd baseman by not covering first base or second base at the correct time can be fatal for a team by opening the door for an opponents scoring a big inning.

The second basemen have to be able to know when to cover two of those bases—first base second base. 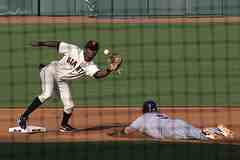 Here is my 25 point checklist for the second baseman. Solid infield play includes being able to play second base well.

All infield base ball positions should be aware of how to play 2nd base. Use these 2nd base coaching points to teach your infielders some the key secrets to be the best second baseman.The best 2nd baseman...

1. Puts the left foot on the top of the second base with the majority of body weight and the foot slightly opened outward when taking the throw starting turning the double play. Always anticipate and ready for a poor throw.

3. Ready to cover firstbase on the sacrifice bunt. The pitcher covers 1st base on groundball plays when the first baseman goes after groundballs. On sacrifice bunts though, the 2nd baseman must be on full alert to anticipate covering 1st base as the pitcher will not be available.

4. Backs up firstbase on the groundball hit to the left side and nobody on base.

5. Communicates with the shortstop and pitcher on who covers second base bag on the comebacker to the pitcher with a runner on first and less than two outs.

6. Is the lead man on the double cut off relay plays on extra base hits to the right side of the field.

7. Walks toward runner at second base before the pitch to prevent runners from wandering off too far and stealing third base.

8. Extends the bare hand to tell the pitcher to pick-off at second base if the runner gets too big of a lead and threatens to steal third base.

9. Quickly returns to the position before the pitch once the runner is stabilized and not threatening to steal.

10. Never wants to be ‘stuck’ at or near second base out of position when the pitcher delivers the pitch home. Never stands on 2nd base holding the runner on base.

Watch the pros—a 2nd baseman cannot give up that much of a hole for the hitters to hit through. Nothing shouts, "POOR COACHING," louder than watching the 2nd baseman stand on 2nd base in a stationary position holding on the runner at 2nd base.

Turn 2: Get the First Out For Sure 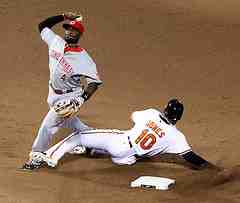 11. Communicates with shortstop with the open mouth=you cover and closed mouth=me cover before the pitch to see who is covering second base on the steal play.

13. Knows you cannot cover two places at once trying to “hold your ground” on the baseball steal or the hit and run play.

14. Will shuffle toward second base when the runner breaks on the steal still in position to cover some ground. Runs the last few steps to the bag if the catcher has the ball.

15. Always is sure to make the first out on the double play when looking to turn 2. ‘Get ONE for sure”.

16. Has a pre-pitch routine to time the pitch to be on the toes when the batter swings the bat.

17. Lets the first baseman know with a discreet, quiet, late, vocal sign when the off speed pitch is called with a left-handed hitter up.

18. Takes everything they can get on pop ups in the outfield until the outfielder calls you off.

19. Always looks to catch pop ups behind the first baseman in short right field and in foul territory and shallow centerfield.

20. Notifies the third baseman whether or not they will be able to be at the second base bag or not for the force play with 2 outs and a runner at firstbase.

2nd Baseman: Are You Ready for Action! 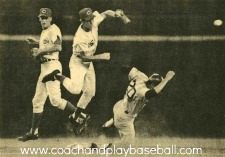 21. Knows to let the ball travel as far as possible on tag plays and slaps the tag with the second base glove quickly straight down to the sliding runner.

22. Know how to take deep angles on plays hit to the left and right.

23. Uses the one shuffle and throw footwork and bow and arrow throwing technique with the legs and feet underneath. Knows the speed of the base runners.

24. Covers firstbase on a base hit to right field and center field when the first baseman is the cut off man to home plate with a runner on second base.

Second base is a very busy baseball position.

I like all infielders to be able to play all infield positions and be interchangeable and versatile.

Share, teach and coach all your players on the responsibilities and techniques on how to play 2nd base.

There is no time for taking a play off. Mental lapses are not an option. Teach players how to avoid lapses and how to play smart baseball using the second basemen checklist.