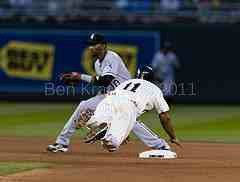 Baseball signals really do not exist. Yes, I will give you a little inside baseball tip.

In higher levels of baseball we call baseball signals ‘signs’. The coach or manager will get the baseball team together and ‘go over the signs’. A new player on the team should always ask two things right off the bat.

First: ask the coach or manager what they would like to be called?

Second: ‘What are the signs’? In the top levels of baseball (professional baseball) do not use the words ‘signals’ or you will get corrected real quickly.

Using Baseball Coach Signs
for Stealing a Base 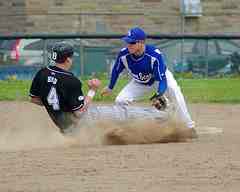 Stealing second base can be a vital offensive weapon for any baseball team. Anytime a ballclub can utilize base running to advance a base runner into scoring position without a basehit or giving up an out, the teams chances of scoring have dramatically increased.

The threat of the stolen base forces pitchers to take notice of the baserunners. This base stealing ‘pressure’ causes catchers to have to make baseball plays. Infielders have to give up ground to be able to cover second base.

And, pitchers have to put some of their attention to holding on the runners, which may cause a pitcher to lose focus and control of their pitches.

Hitters can take advantage of pitchers mistakes and get some really good pitches to hit in hitters counts. So, there is a lot to gain by a teams or a players ability to steal bases.

Stealing Second Base with
the Straight Steal Signs

There are several variations of baseball signals and signs that I use for my base stealing players. Base running speed varies from player to player.

Most players will not lead the league as one of the stolen base leaders. So, some base runners need different stealing signs in baseball.

Some players are fast enough, get good ‘jumps’ and are trustful enough to not get picked off that I can give them the ‘green light’ baseball hand signs.

Other base runningless speedy players need special baseball steal signs where I have to pick their spots for them to run.

Plus, I use a stopwatch for timing so I know how fast the pitcher will take to throw the ball to the catcher and how fast the catcher can get the throw to second base. Knowing the catchers and pitchers timed speeds along with knowing how fast each of my base stealing players takes to run to second base helps me decrease my risk and put the odds in my favor when stealing bases.

Now, with the math added in my head I can pick a pitch, a count or situation for giving baseball signs to my base stealer when the odds are in my colum

Stealing a Base vs. Right handed Pitchers

I give a steal sign (the proper name for baseball signals) to runners on first base for one pitch. My baseball coach signs for base stealing tells the runner they are ok to steal the base in this pitch.

If the runner does notget a really good ‘jump’ they know that they can shut it down for the that pitch.

I give stealing signs and let the batter know they can swing by tapping my fists on top of each other—no tap then the batter should take a pitch or fake a bunt and pull the bat back just before the catcher catches the pitch.

Now, if the runner does not steal or the ball is fouled off I may or may not put the steal sign on again.

Baseball signs for little league and youth baseball leagues that do not allow leading off do not apply as much since stealing off the pitcher and catcher is not possible until the pitch crosses home plate.

Stolen Bases: Use Base Running Speed 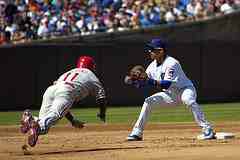 Some base runners are really fast and skillful at getting a good ‘jump’. Getting a ‘jump’ means the reaction time is very good for the base runner that almost simultaneously takes off for second base the instant the pitcher lifts their front heel.

These players with good base running speed and reactions are capable of stealing at any time and against almost all pitchers and catchers. I give these runner the ‘green light’.

This means the base stealing runner can steal any time that they want without having the coach giving baseball signs. These players are rare but when you get one let them run. They may even set a stolen base record.

When I am in the third base coach box giving baseball signs I have a sign where I tug my left belt that gives a runner the ‘green light’ for just that one pitch.

Don’t go sign: If I have a base stealer with the ‘green light’ (option to steal a base at any time) I may from time to time give them a no steal baseball sign Or baseball signals. I will hold my hands together for a moment to kill the steal sign for that pitch.

I pick a pitch to steal on and tell the runner to ‘go on first move’. This takes the risk away from the player and puts it on my neck. I take the gamble.

As soon as the pitcher picks up the leg the runner takes off for second base.

If the pitcher picks off then the runner tries to beat the throw at second base from the first base man.

Now, more crafty base runners may be able to handle reacting to a pitchers motion and figure out exactly when the pitcher is pitching home and still get good jumps off the pitcher. These runners can use a ‘green light’ for a pitch.

Delay Steal Baseball Signals (Signs): Used when a base runner is not fast enough to steal a base the conventional way. I am relying on either the catcher or the infielder to drop their guard and not throw on time or cover the base in time.

This is a deception play and very under utilized. Mostly because amateur coaches do not know how to teach the proper technique to perform a delay steal.

The key is to take an enormous secondary lead without drawing attention from the infielders covering the bag. The runner must stay sideways as they are shuffling off the base using three very large shuffles. (There is even a trick to getting further off the bag without being noticed).

Right when the baserunner completes the three giant shuffles they will immediately take off full speed toward second base. I use four claps after the indicator for my base stealing signs for the delay steal play.

Go but don’t get picked…3-1 or 3-2 count: With less than two outs and 3-2 or 3-1 count I often want to get the base runner moving on the pitch. But, we never want a runner picked off first base.

Even with two outs this baseball situation may apply. It doesn’t matter if the defensive team knows we are stealing because they cannot pitch out anyway.

So, I want the runner to get the best jump they can without getting picked off the base. I often just motion with my baseball hand signs toward second base since everyone in the ball park can know we are stealing but there is nothing the pitcher or catcher can do about it. It is likely going to be ball four, foul ball, or the ball in play.

A 3-1 count could draw a throw down on a swing through strike but I am betting on my hitter that will not happen. Ha.

Thank you for visiting coachandplaybaseball.com and my baseball signals article. Add to the site by making a comment, ask the pro, bookmarking the site and sharing with other baseball folks.